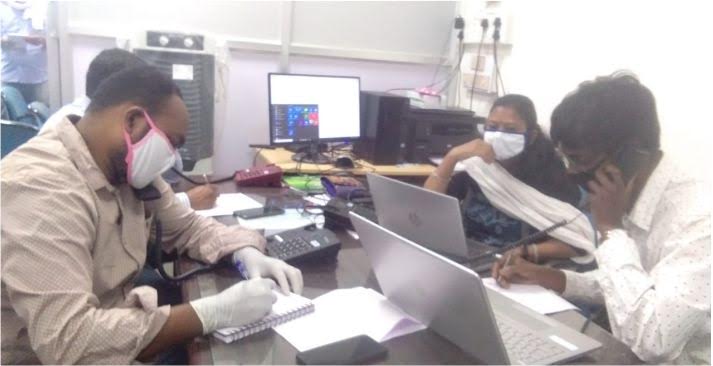 The nationwide lockdown was announced in the wake of a possible COVID-19 outbreak on March 24. This lockdown has led to several humanitarian challenges for the vulnerable communities of our society. Lakhs of labourers, most of them daily wage earners working in the informal sector, were stranded in various cities and states across the country. Some of the stranded migrant workers have faced issues, such as lack of food and money to survive the 3-weeks of lockdown that was eventually extended for another 19 days.

The team of PACS-PHIA Foundation, Jharkhand led by State Manager Mr. Johnson Topno, swung into action with a plan to reach out to the migrant workers from Jharkhand and provide them as much help as possible.

Mr. Topno, proposed to set up a helpline for the migrant labourers to Mr. Rajiv Arun Ekka, the Principal Secretary to the Chief Minister, who immediately agreed to the idea. On March 26th the helplines were opened for the people of Jharkhand stranded outside the state.

Initially, only 10 phone lines were available wherein the team of PACS-PHIA Foundation and shared details with the Government of Jharkhand for necessary action. Soon, personnel from different government departments joined hands for the cause to make 200-person strong COVID-19 Response Team at the Nepal House Secretariat.

The State COVID-19 response Team, under the Department of Labour, Employment and Training, Government of Jharkhand is working in three shifts (24×7) since then collecting and analyzing the data received through the calls and forwarding it to the government officials for necessary action. The team has received over 30,695 calls by 20th April and has found the whereabouts of over 9.17 lakh people, who are stranded outside Jharkhand.

The team managed by PACS-PHIA Foundation has been counseling and assisting migrant workers for health care, shelter, food supply and follow the government norms on COVID 19. Also, in emergencies cases of people who are stranded at various places the team is appraising their situation to the decision-making authorities on the State for immediate action.

The most encouraging part of the efforts is that around two lakh migrant workers have registered themselves for help through the Mukhyamatri Suvidha App started by the State Government to help the migrant workers. These workers will be provided with some basic cash assistance into their bank accounts shortly the by the government through Direct Benefits Transfer method.