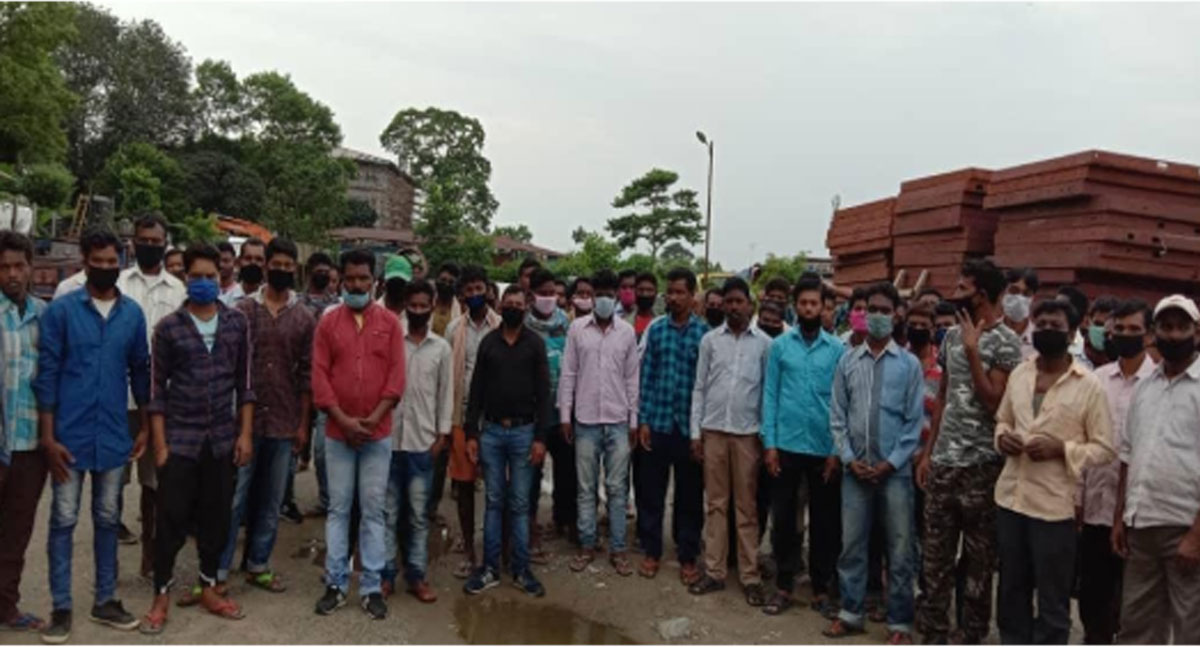 India has been suffering from the issues of migration for a very long time, and this pandemic has worsened it the most. The country had been in total lockdown due to the novel coronavirus, and the migrant workers were desperately waiting to go back home. The laborers from Jharkhand who aspired to earn a decent livelihood, migrate far from their family to the neighboring countries. Movement of workers within the states has been a challenge, but bringing the workers across the borders has been fraught with additional jurisdictional and protocol-related challenges. Most of the laborers who migrate from Jharkhand are the daily wage earners and constitute a vast area of the unorganized sector. Since most do not follow the safe migration protocols, they are often very vulnerable and are usually made to work for minimum wages, long working hours, no safe and secure workplace, etc. This set of vulnerable workers, who are already working and living in extreme precarity, found their situations worsen as the COVID 19 spread across the world.

Approximately 1000 Indians went to Bhutan to earn their livelihood and worked for the company named Jai Prakash Associates. This company does hydroelectric projects that involve the construction of dams. Approximately 300-400 stranded workers where there from Jharkhand state, and they were mostly labor class workers already getting a meager salary. Due to the pandemic, they got even less, which was utterly insufficient for their own or their families’ survival.

The last two months have seen a massive wave of the internal as well as the external migration, and this is the reason we should talk about those invisible workers who, for many years, have been sustaining our economy on meager wages. The stranded workers have been facing a tough time, as they cannot afford monthly room rents, food, and other basic amenities since all the factories and manufacturing sites are closed, and no wages are paid for the past months.

Like Janardhan, many people from different states migrated to other Bhutan in January 2020, to earn their livelihood. He, along with others, went to Bhutan, and he was assigned the job of a tradesman in the company named Jai Prakash Associates due to his education. He used to earn Rs17500 for living after working for 12 hours, but after the lockdown, he worked only for 8 hours for which they got Rs. 6000 only, which wasn’t enough for him to maintain his family’s basic requirements. He said they had a proper arrangement for food and shelter, but Janardhan also showed his vexation when he said, “ Bhutan sarkar or hamari company ne koi action nai liya. Hum sab bohot takleef me the or hume ghar wapis aana tha. Embassy se bhi koi madad nai mili”. (Bhutan government and the company did not take any emergency action when we went to seek help from them to come back home. Visiting the embassy was also futile attempting several times).

Suresh Kumar says, “ paise bohot kam milte the or corona ke wajah se or bhi kam ho gaye. Ghr pe paise nai bhej pa raha the jiske wajah se ghr ki arthik stithi kharab ho gayi. Mujhe yahan bohot takleef ho rahi hai or ghar jald se jald jana hai. ( I was already getting very little money and due to corona even that got reduced. I was not able to send the money to my family because of which financial situation became wors. I want to go back home as soon as possible).

(We were not given proper lodging and food to eat. We were forced to work and salary was not given. No one was helping us to come back).

After all the attempts from the state government, the state control room, as well as the embassy, Mr. Janardhan, along with his co-migrants communicated to the state migrant control room Jharkhand, and explained their issues. The control room without any delay took immediate action and kept in constant contact with them so that they do not feel left out and provided immediate help to the poor migrants and arranged proper transportation to bring them back, and within a week, they all were brought back to Jharkhand.

(Suresh, while speaking, got emotional, and thanked the Jharkhand Government from the core of his heart. He also thanked our chief Minister, Mr. Hemant Soren, and he wishes for him a good, healthy, and safe life. He is also grateful to the control room team for always being in contact and thanked each and every member for his or her support and immediate help).

(Suraj said, he is thankful to the state migrant control room and Jharkhand government for bringing them back, keeping in mind all the safety and precaution measures. He also said that the control room never left them and was in constant contact that kept their expectations positive).

Tags
Across the border- Stories of stranded migrants from Bhutan