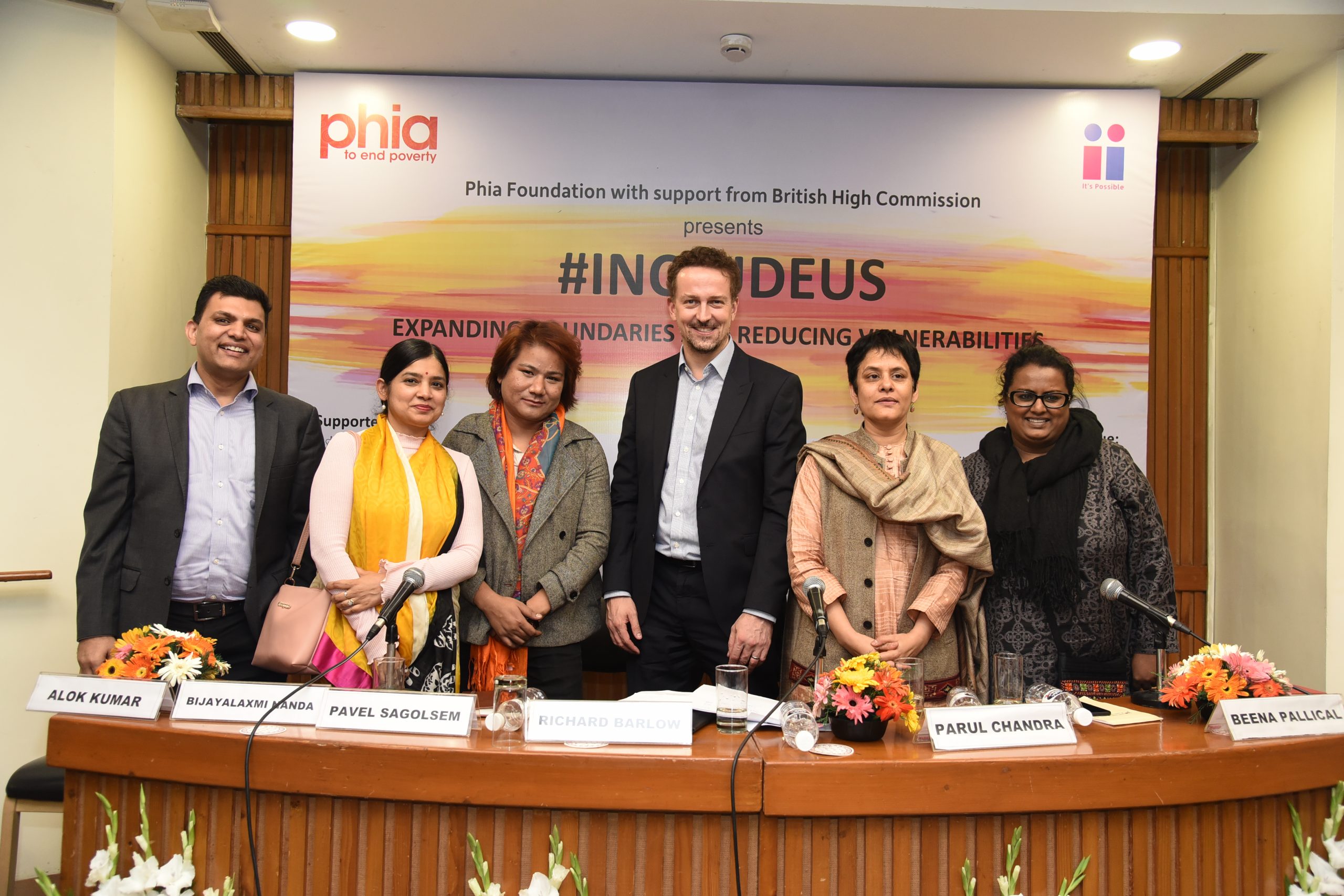 Taking forward our commitment on the issues of gender equality and ending violence against women, PHIA Foundation in collaboration with the British High Commission organised an event during the 16 Days of Activism, which aimed to create opportunities for dialogue between various stakeholders in civil society, policy-makers and the public on the issue of Gender Based Violence with a specific focus on young people. The event, #IncludeUs: Expanding Boundaries and Reducing Vulnerabilities, was held in two segments, first a workshop and then a plenary session attended by people from related fields – Private sector companies/brands, Factories/manufacturing units, civil society organisations, bilateral agencies, practitioners and experts in the field and youth.

In the first segment of the program a youth workshop was organised on 1st and 5th December 2018. The workshop focused on a cognitive and effective exploration of the theme of masculinity and femininity. It began with an icebreaker followed by an interesting activity to understand how participants perceive men and women differently by  passing around of a ball around the circle of participants, with each participant asked to write down one word they think of as an answer to “what is a woman?” alternated with “what is a man?” before passing the ball along. What emerged were the different notions that the group held about men and women. This process was furthered through the next visual activity which was visual where a selected stash of photographs were randomly distributed among the participants to help them explore their notions of what it means to be a man or a woman. The photographs challenged common notions held by some of the participants, evoking reactions of discomfort, disgust and bewilderment.

The second session of the workshop was focused on an affect-oriented exploration of the self as participants were asked to confront questions on how much freedom they have/had to make choices in their lives, what restrictions (if any) are placed on each of them, how much of ‘I’ is there in their decisions. The group then engaged in an individual activity of mask creation. All of us wear masks; what we present to the world is likely to be different from who we think we actually are. The day concluded with a creative and visual exploration of each participant’s notions regarding masculinity and femininity. The idea for the workshop was to leave the youth questioning the general notions which we grow up believing as normal and how over the course of time they become a non-negotiable truth which then leads to discrimination, aggression and violence when people don’t meet their notions of normal.

In the second segment of the program on 7th December 2018 a workshop and panel discussion was held at the India International Centre, New Delhi. The day started with a workshop on “Gender: A dynamic concept”, facilitated by Mr. Vikramjeet, an art-based therapist, stage actor and director, and PHIA foundation. Around 35 youth participated in the workshop and discussed and debated their understanding and views on gender. One critical takeaway for the participants was the difference between sex and gender, the former being a biological fact and the latter as a social construct. Through group activities, participants explored gender roles and prevalent gender-based stereotypes that exist in society and how it varies across cultures.

The workshop was followed by two panel discussions on Gender Equal Value Chains and Expanding Gender Boundaries and Reducing Vulnerabilities. The first panel was moderated by Mr. Ranjeeb Sarma, Head- Compliance, CSR, Plan A & Admin, Marks and Spencer. The four panel members discussed and put forth interesting aspects related to gender equality at workplace, across both organized and unorganized sectors. Given the current set of challenges and the overarching ethos of patriarchy that dominates the society, it was recognized that gender sensitization and awareness creation around equal rights for men and women is the need of the hour towards achieving gender equity and equality. Mr. Ranjeeb Sarma concluded by saying, “it is encouraging to see that traction is happening, but we still have a long way to go in this journey towards achieving gender equality”

The next panel moderated by Mr. Richard Barlow, Head, Political and Bilateral Affairs, British High Commission shared experiences and stories to highlight the importance of gender equality. Panellists expressed their views on the #MeToo campaign, complexities and issues in the corporate sector towards achieving gender equality, inclusiveness towards the LGBTQ and the  concept of ‘agency’ for women as well as those belonging to marginalized sections of the society

The panel discussions were followed by a session in which workers who have been a part of the Gender Equality Programme, implemented by Change Alliance, with support from British High Commission, Marks & Spencer, and Super Dry, shared how has this programme helped them.

The day ended with a street play performance by IYRC theatre group on vulgar and misogynist Bollywood songs promoting a culture of impunity and toxic masculinity and an act around how the onus of honor falls completely on the shoulder of women when she is the one who also is the victim.