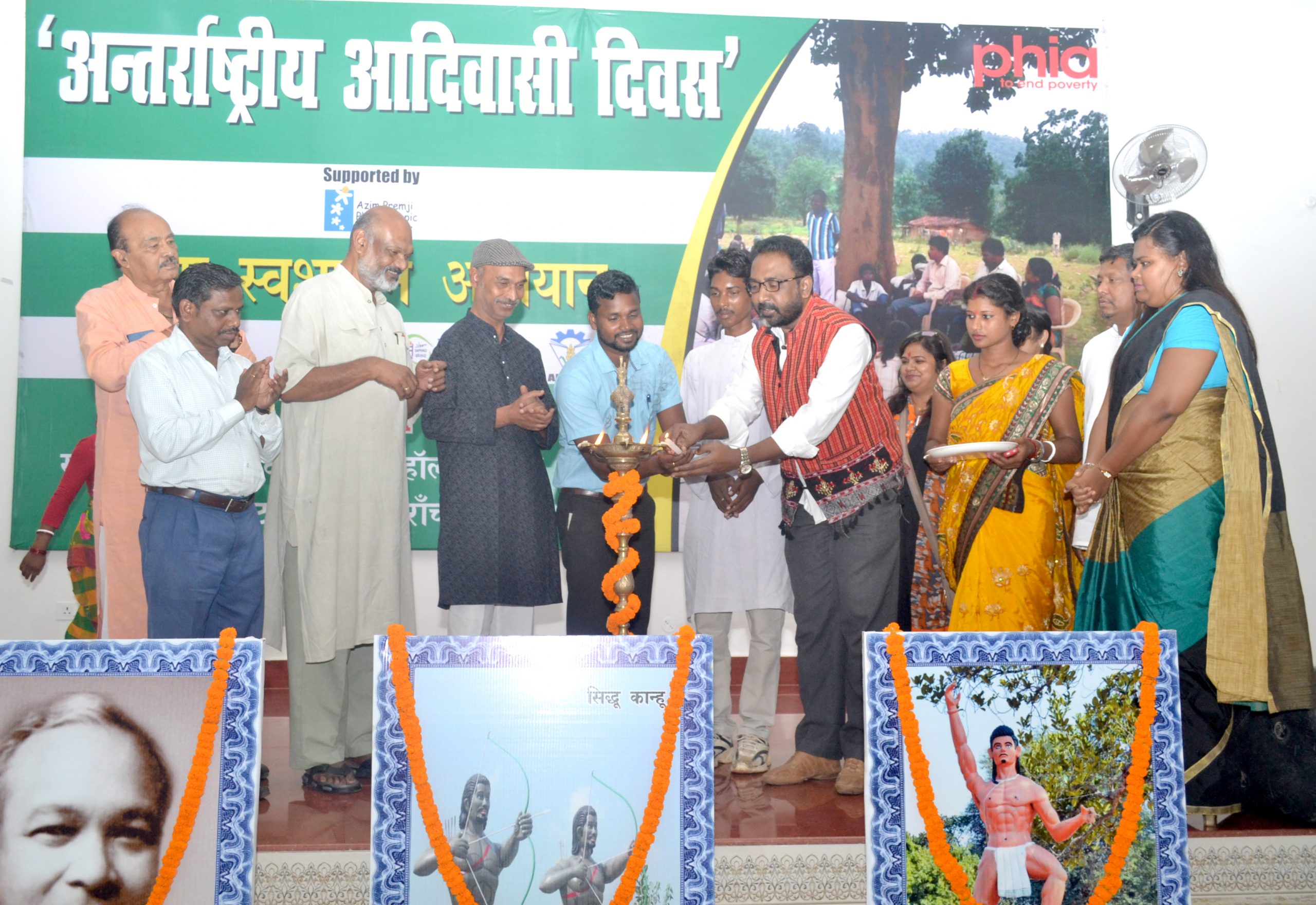 Indigenous peoples have sought recognition of their identities, way of life and their right to traditional lands, territories and natural resources for years, yet throughout history their rights have always been violated. Indigenous peoples today, are arguably among the most disadvantaged and vulnerable groups of people in the world. The international community now recognizes that special measures are required to protect their rights and maintain their distinct cultures and way of life.

Jharkhand being a land of tribals, land of forests has varied indigenous communities that constitute 26.2% of Scheduled Tribes population.

To mark the occasion on account of International Indigenous day on 9th August 2018, Gram Swashashan Abhiyaan felicitated leaders and commemorated the sacrifice made by martyrs like sidhu Kanhu, Tilka Manjhi, Tana Bhagat and others. More than 200 participants from Santhal, Kolhan and South Chotanagpur, traditional leaders, representation from civil society organizations, academia, media, and people’s representatives witnessed the celebration.

The programme started with the context setting recognising the struggle and movement led by martyrs like sidhu Kanhu, Tilka Manjhi, Tana Bhagat and other freedom fighters to safeguard the interests of the tribal communities and their rights. The gathering paid tribute to these tribal freedom fighters.

The State Manager Mr. Johnson Topno, set the context of the event and the celebration. He elaborated on the tribal way of living, culture and vast and varied history. He focused on the customary and constitutional rights given to the tribal communities.

Shri Ratan Tirkey, Member, Tribes Advisory Council, GoJ, the Chief Guest, emphasized on the role of young and adolescent members of the community in talking the cultural heritage forward. He laid emphasis on the conservation of one’s resources in order to conserve their heritage, and self-reliance for holistic development.

Kanhaiya Munda, great grandson of Bhagwan Birsa Munda, was invited to be a part of the celebration and shared his vision of Gram Swashshan of Jharkhand within the premises of tribal ethos and philosophy. He talked about the equality and fraternity and space for everyone within the constitutional framework.

Anuj Lugun, Assistant Professor, Central University of South Bihar, talked about the Fifth Schedule and of the PESA Act and about the strong role that Gram Sabhas play in strengthening the democratic system as it involves people’s participation, and helps in spreading awareness about one’s indigenous rights along with their constitutional rights.

Sri Balram Ji, Former advisor to Commissioner of Supreme Court, highlighting the critical issue i.e. cost which is borne by the adivasis in the name of development, namely resettlement and rehabilitation, depletion of forest and land resources, and other paradigms of development like the adverse effects of mining and building of large scale developmental projects and programs.

Gurjeet Singh, Director, Social Audit, threw light on how the amalgamation of technology along with the customary traditions can help in achieving sustainable development.

The Chief Functionary, SAMVAD Sri Ghanshyam Ji, emphasized on the history of formation of Jharkhand. He further added on Sharing of learning, experiences and critical challenges pertaining to rights of the indigenous people and how to facilitate more inclusive tribal engagement and planning.

Sri Mahadev Hansda, Save the Children, threw light upon the holistic scenario of the indigenous people, and talked about the safeguarding of the rights. He brought about instances of how rights of people are violated, and of ways in which it can be prevented. The way forward should include sustainable goals which are inclusive of the cultural identities of people.

The celebration concluded with a cultural program representing the culture of the three community contexts Ho tribe in West Singhbhum, Santhals in Jamtara and Oraon in Gumla. The folk songs, dance, skits captured the indigenous culture and tradition of different districts of Jharkhand.

The event provided a common platform to the community leaders share their experiences, learning and achievements from their area.