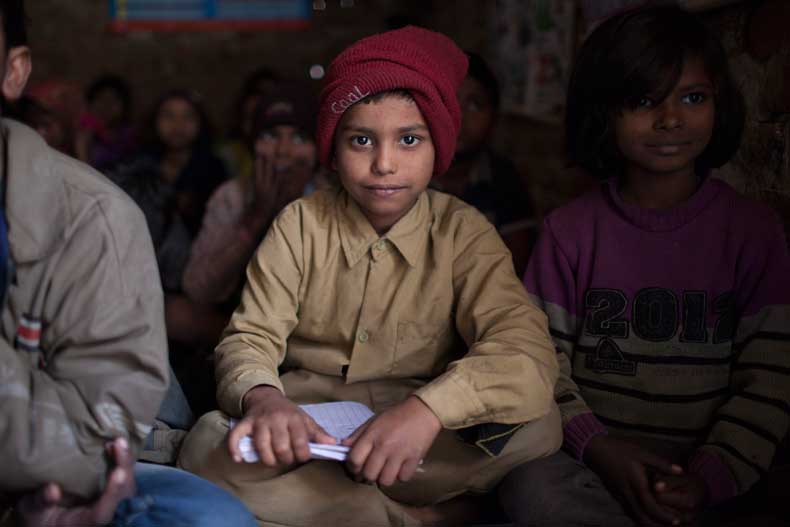 On The Garbage Dump In Bhowapur

In the middle of a garbage dump in Bhowapur, on the outskirts of Delhi, down the muddy roads among houses as ramshackle as they come, you will find a beacon of hope.

Phia is supporting an education project which provides basic schooling to 150 children from the desperately poor ragpicker community that calls this place home.

Jugnu – which means firefly – was set up six years ago by teacher Biba Singh and her husband Manoj Kumar. Phia Foundation has been backing the project since 2014.

‘I am employed in this slum. I would see children playing around. At last we decided to do something and provide basic education for the children,’ says Manoj.

‘We want to help them grow and move away from this slum eventually. We expect the kids to do well in their life and we hope when they are successful they will remember we played a part in taking them forward.’

Jugnu has two very small classrooms, yet one is packed with about 60 or 70 children, the other with about 40. ‘It’s difficult to teach all the kids at once,’ admits Biba. ‘We need three schools not just one.’

She explains that Jugnu has been asked by the community to set up schools in other locations in around the Bhowapur slums. Phia Foundation is also looking for other similar projects to support, so it could be possible to help Jugnu grow.

‘Delhi has a large number of slum populations,’ says Phia Foundations’s Eyingbeni Ngullie. ‘There are a huge number of ragpicker communities – I definitely see this as a replicable and scaleable model in urban areas.

The ragpicker community has been growing up around the garbage dump for around 25 years and is home to about 25,000 people, mostly dalits who have migrated from other parts of Uttar Pradesh, West Bengal and Bihar.

Eyingbeni Ngullie adds: ‘They are the most excluded and the poorest of the poor. We will have to wait for several years to see the impact, but we have already started to see a lot of changes. We can see changes in the health of children.

Jugnu is a ‘bridge school’, providing a basic education for children and hopefully preparing them for enrollment in government schools nearby. Twenty children have moved on to other schools so far, some returning to Jugnu for extra tuition in the evenings to help them get up to speed.

‘After two years, children started going to government schools,’ says Biba. ‘Many of them are still studying there.

‘When they leave, the kids start crying – they don’t want to leave. I tell them it’s for their future -they have to go. It gives them opportunities in life.’

Uday, 7, (pictured above) has been coming to Jugnu since April 2014. ‘I like coming here. Right now I’m studying mathematics – addition,’ he says.

Poonam, 15, fits in school and homework in between cooking and cleaning at home. Like many children who live here, she also has to help her parents to find and separate recyclable rubbish.

Jugnu teacher Nisha Pal says: ‘They are really good students – they always do their homework. Except the kids that help their parents, they are not able to do so much.’

Living such a hand to mouth existence, a daily struggle for survival, school is unsurprisingly not a high priority. Parents have little motivation to keep children in school when instead they could be helping to boost the family’s meagre income.

It seems to be working. Rajkumari Devi (pictured below) has three children at Jugnu – Sharwan, 8, Nandini, 6, and Shubham, 3. ‘I would really like to see my children get out of this slum, maybe not as a teacher or as a doctor, but out of this place. We are very happy that the kids are getting to be educated.’

You can support projects like the Jugnu project in Bhowapur.

Giving to Phia will help us provide essential services to poor and marginalised communities, making a real difference to people’s lives in India. 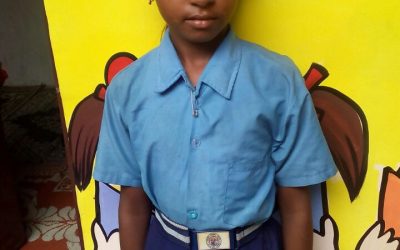 Pursuit Of Changing Life For Better

For 3 hours a day, 10 year old Arifa collects reusable garbage. She does it because she’s told to, and not because she’s aware that it’s sold to provide for her family of three older sisters and a one-year-old brother. She’s a girl, and hence, doesn’t need to be... 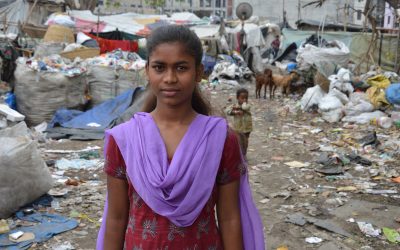 I Don’t Want To Collect Garbage For Money.

Along the Uttar Pradesh Border, buried in the by lanes of Bhowapur, is a learning centre run by Phia Foundation, for children from the rag picking community that lives in its fringes. The children come from make-shift houses, constructed on mounds on garbage, which... 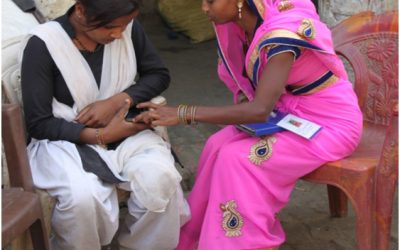 Reaching Out To The World Through Internet

Hemlata, twenty years old and married is another Internet Saathi who is transforming the skills she learnt to the women in village Bhagwanpur. She takes a lot of pride in helping other women to learn the internet. None of the women in the village own a mobile phone.... 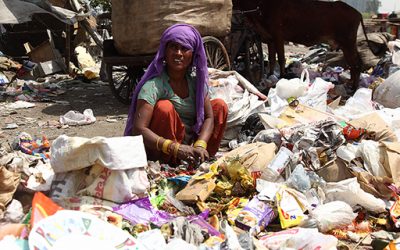 All Five Children At School

Kiran Devi lives in Bhowapur’s ragpicker colony, on the outskirts of Delhi. She gets up early every day and works long hours sorting out rubbish and classifying it in different categories so it can be sold. Kiran now sends all five of her children to school every day... 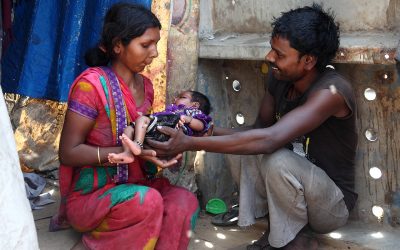 Their daughter Kajal was only three months old when she died of malnutrition. Manoj Ravidas and Pratima Devi work as ragpickers in a slum community in Bhowapur on the outskirts of Delhi. Living in such appalling conditions, on a garbage dump, it’s hardly surprising... 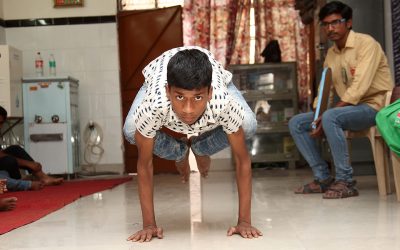 Education Is A Route Out Of The Slums

Muskan takes us inside the improvised, ramshackle slum dwelling she calls home, and pulls aside the curtain that leads into the bedroom she shares with her mother and siblings. Except there aren’t actually any beds. ‘I sleep wherever I can find a bit of room – there’s... 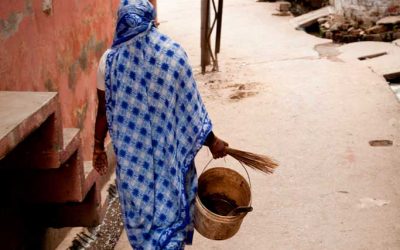 Manual scavenging, the process of removing, carrying and disposing of human excrement from dry latrines by hand, is inhumane and illegal in India. However, many thousands of people find themselves and their families trapped in this work. Manual scavenging is a... 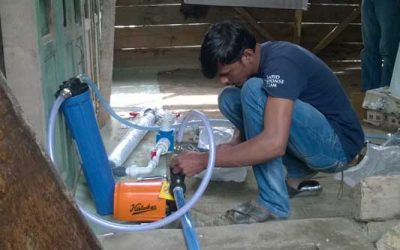 Massive floods hit the northern Indian region of Jammu and Kashmir in September 2014 after torrential rains caused rivers to burst their banks and overwhelm defences. More than five million people were affected by the floods – the worst in the region for 60 years –... 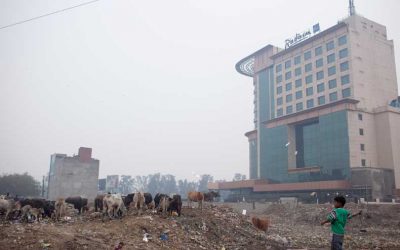 Wealth And Extreme Poverty Side By Side

The slums of Bhowapur are overlooked by the plush, high-rise Radisson Blu hotel. Guests can look down from their windows to see children as young as two burrowing through rubbish like animals. Such a stark juxtaposition could hardly have been set up any better. Or,... 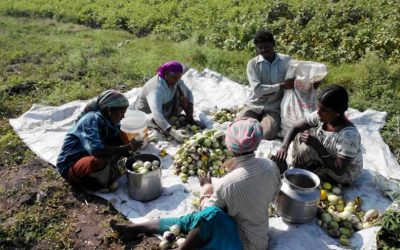 For many farmers, a sustainable, decent living wage is very hard to come by – especially for those from excluded communities. Phia supports initiatives like the Eco-veg project in Tamil Nadu where farmers are improving their livelihoods and growing organic crops that...